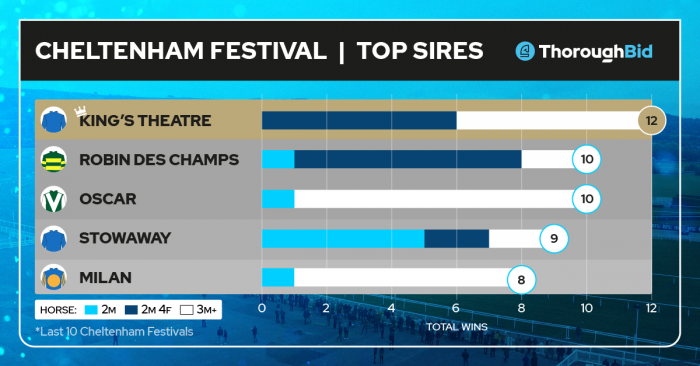 TOP SIRES AT THE CHELTENHAM FESTIVAL

In the last 10 years, King's Theatre has sired more Cheltenham winners that any other stallion, with 12 winners to his name.
Six of those winners came over an intermediate distance of two-and-a-half-miles, while six came at trips of three miles or further, showing King's Theatre's strong influence of stamina.
King's Theatre (Sadler's Wells - Regal Beauty II) was a high-class middle-distance horse on the Flat, who won the Group 1 King George VI And Queen Elizabeth Diamond Stakes at Ascot in 1994 for owner Sheikh Mohammed, trainer Sir Henry Cecil and jockey Mick Kinane.
He was retired to stud two years later, after a brief stint with Bill Mott in America, and began his career at Ballylinch Stud in Ireland.
The 2013 Festival was a particularly good year for King's Theatre as he produced impressive Ryanair Chase winner, Cue Card, as well as Neptune winner, The New One.
Other Festival winners include Philip Hobbs' two-time Cross Country Chase winner Balthazar King, Glens Melody, Diamond King, Brindisi Breeze, Fingal Bay, Riverside Theatre and William Henry.
Most recently he was successful with Champ in the 2020 RSA Novices' Chase.
Only one of his progeny is set to line up at this year's Festival, with Champ set to run in the Stayers' Hurdle on Thursday.
King's Theatre's immediate legacy is now thinning out a little, having passed away in 2011, but he still has a number of high quality progeny in-training and it would be great to see him notch another Festival success.
Vega ensures Champs' legacy lives on
Robin Des Champs (Guard Royale - Relayeuse) has produced some brilliant Cheltenham winners of the last 10 years, with the majority of his 10 winners coming over an intermediate distance of two-and-a-half-miles.
Willie Mullins has had great success with progeny of Robin Des Champs in the past and has trained seven of his 10 festival winners.
They include the magnificent mare Quevega, a six-time winner of the Mares' Hurdle from 2009 to 2014 and 2012 2m4f novice chase winner Sir Des Champs.
It's difficult to picture a more imposing horse that Mullins' Vautour, who won the Supreme Novices' Hurdle, JLT Novices' Chase at successive Festivals, before making it three in a row with a breathtaking display of jumping in the 2016 Ryanair.
Robin Des Champs was a four-time winning hurdler over two miles in France before retiring to stud after only the fifth start of his career in 2000. Standing at Glenview Stud in Ireland he commanded a fee of ¬8,000 in his prime.
His most recent Festival winner came when the Gordon Elliott-trained Blow By Blow stormed home to win the 2018 Martin Pipe.
While Robin Des Champs has no direct progeny running at this year's Festival, he is represented by a son of Quevega, Facile Vega, who is a strong favourite for Tuesday's Champion Bumper.

Famous sons of Oscar to do battle in Stayers' Hurdle
Few sires have such a strong influence on stamina as Oscar (Sadler's Wells - Snowy Day I), and nine of his 10 Festival winners since 2012 have come over three-miles or further.
The exception to that rule was Rock On Ruby, winner of the Champion Hurdle in 2012 when trained by Paul Nicholls.
Since then, Oscar has produced 2014 Gold Cup winner, Lord Windermere, as well as several winners of the Stayers' Hurdle.
Rebecca Curtis does well with his progeny, and four of her five Festival winners have been by Oscar. The first of those was with Teaforthree in the National Hunt Novices' Chase in 2012, and she has since twice won the Albert Bartlett with At Fishers Cross, the RSA with O'Faolain's Boy and most recently the 2020 Stayers' Hurdle with Lisnagar Oscar.
Lisnagar Oscar will line up once again in the Stayers' Hurdle, and the Pembrokeshire-trainer has another son of Oscar in Pats Fancy, who will bid to follow Teaforthree in the National Hunt Chase on Tuesday.
However, perhaps the most famous son of Oscar is 2019 Stayers' Hurdle champion Paisley Park, who will bid to repeat the feat in this year's event.
Other notable progeny set to line up this year are Tommy's Oscar in the Champion Hurdle, Gordon Elliott's The Bosses Oscar in the Coral Cup and Colin Tizzard's Oscar Elite, who is likely to take his chance in the Kim Muir.

Stowaway progeny could build on strong 2021
No sire had more success at the 2021 Festival that Stowaway (Slip Anchor - On Credit), with four winners including Champion Chase victor Put The Kettle On, Monkfish, The Shunter and Telmesomethinggirl.
Monkfish and Put The Kettle On were both successful at the 2020 Festival, but before that Stowaway's only three wins in the last 10 years had come courtesy of Champagne Fever in 2012 and 2013 and Champagne Classic, winner of the 2017 Martin Pipe.
Stowaway's progeny typically have a good blend of speed and stamina, with five of his nine Festival winners coming over two miles, and two each over two-and-a-half-miles and three miles plus.
Many of Stowaway's 2021 winners - Put The Kettle On, Telmesomethinggirl and The Shunter - are set to return to the Festival this year. Add to those the strongly fancied Stattler in the National Hunt Chase, Kilcruit in the Supreme and Hillcrest, now favourite for the Albert Bartlett, and he looks sure to add to his Festival haul.

Milan still has time on his side
Coolmore's Milan (Sadler's Wells - Kithanga) is a younger sire than the others above him in the rankings, and the only one still standing at stud.
He has sired eight Festival winners in the last 10 years, with 2014 Champion Hurdle winner, Jezki, the only winner over less than three miles.
2020 Kim Muir winner Milan Native was his most recent Cheltenham Festival success.
His chances of adding to that success look limited, with McFabulous in the Coral Cup and Dancing On My Own in the Cross Country Chase probably his standout chances.