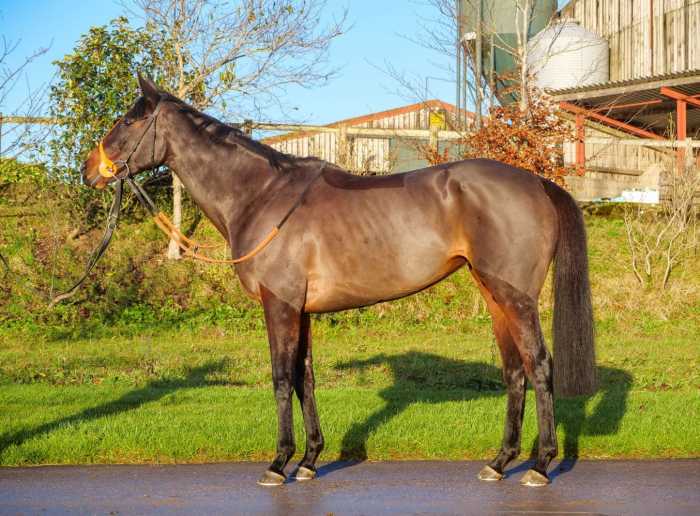 There are some exciting French prospects on offer and not least Why, an imposing four-year-old son of Tin Horse, who boasts a perfect record of two wins from two starts. The first was a comfortable win on the Flat at Dieppe in July before following up impressively on debut over hurdles by nine lengths at Pau last week.

Flash Davier, a three-year-old filly by Doctor Dino, was a winner of her latest start over hurdles at Compiegne under James Reveley, who was more than bullish about her credentials: “She won nicely with a bit in hand. A very likeable filly, who could be one for the Fred Winter in March and going forward has the size and scope to jump a fence.” Hupeca de Thiax is another hailing from across the channel, a dual winner including most recently in a Class 2 at Pau, his half-brother Ironica de Thaix went under the hammer last week fetching €210,000.

Included in Sunday’s billing are Desertmore House, a six-year-old gelding, who won his sole start in a Kildorrery maiden last month, and the imposing son of Court Cove will be eligible for ThoroughBid’s new Point2Rules bonus. Also vying for the bonus will be Tullywest, the Dylan Thomas four-year-old was third on his only start in a Loughanmore maiden and has been described by P2P.ie’s race analysis as “one to note going forward”.

Racing’s first dedicated online auction house has had a successful few months since its launch in September with highlights including selling Jolie Comtesse, the half-sister to Champion stayer elect Trueshan, and Grade One and Cheltenham Festival-winning Belfast Banter for £130,000.

James Richardson, CEO of ThoroughBid, said: “James Reveley, our French National Hunt representative, has been very busy on our behalf and we’re delighted that all his hard work has paid off with such a quality first draft of French recruits in the catalogue headed by the unbeaten Why.

“Such is the convenience of ThoroughBid, there is no effort and expense of travelling to the sale, for both purchaser and vendor alike, which means we can offer high class horses from the UK, Ireland, and France.

“On the Point-to-Point front, we will have a good selection of horses with some exciting wildcards to announce over the coming days from top producers on both sides of the Irish Sea. We are really looking forward to selling the first draft of horses eligible for our Point2Rules bonus.

“As well as the exciting racing prospects on offer, there are some interesting lots for breeders including black type mare, Diamond Gait. The Passing Glance mare, who hails from the family of Royal Gait, is eligible for the Elite Mare Scheme and could be in demand.

“There looks a real opportunity to pick out a new superstar in this catalogue, and we can’t wait to see the bidding begin on Sunday 19th December.”