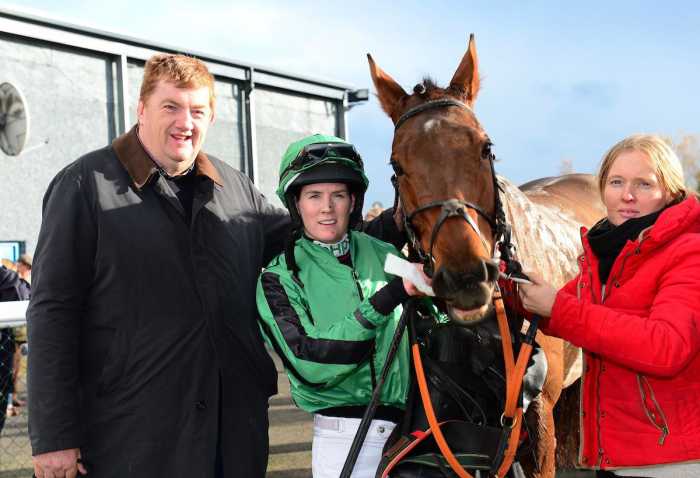 SHARK HANLON: YOU CAN EAT YOUR DINNER AND BID!

Owner and trainer John Joseph ‘Shark’ Hanlon talks about the sales moving online, ThoroughBid’s Point2Rules Bonus, updates us on two recent purchases and why he’s called ‘Shark’:
Bargain buys
Hewick is a horse I bought for €850 from just down the road and I gave him a bit of time and now he’s a 155 horse. I think he’s a really lovely horse. He won the Bet365 Gold Cup at Sandown, formerly the Whitbread, and he’ll probably go to Galway for the Galway Plate in July then on to Kerry for the National, but the big aim for next year will be the National in England.
I paid £600 for Skyace because I knew the filly’s form. She was beaten by Dime A Dozen (another of mine) twice, and I just thought that my filly wasn’t too bad so she can’t be either! When the boys rang me looking for a horse, I had her picked out at the sale along with two other horses, but the first one went for too much, so when she came into the ring, she was my kind of price!
I just love buying horses at those sorts of prices, it’s great.
‘Shark’
A lot of people are curious about the name, Shark, and where that comes from. It actually has it’s origins in hurling, not that I do much of that these days. It was a county final one day when I was a lot younger, and I wasn’t a great hurler, but I was awkward, and things just went right that day.
I had a friend playing for the opposition in this final and he went over to one of the other lads and said “will you cut the head off that shark so we can go home now!” The name stuck that day, it stuck in hurling, and it’s stuck in racing ever since. Now I’m only known as John to my mother and Jim Bolger - he’s never called me Shark.
P2R Bonus
I just love these bonuses and even more when I get them. I had Dime A Dozen in the Mares’ scheme and she picked up a few grand along the way. But I’ll tell you one thing, I’ll be hunting that £5,000 from ThoroughBid’s Point2Rules Bonus with Who’s Houdini, don’t you worry it’s coming to me!
ThoroughBid
I’m the sort of person that doesn’t miss any sale and I’ll always keep my head in because there’s always value at a sale, and I thought both horses I’ve purchased from ThoroughBid were a bit of value.
The thing about ThoroughBid, though, is that you can eat your dinner and bid it’s so convenient! When we put through the winning bid on Who’s Houdini and bought him I was then able to enjoy the rest of my tea. The difference is you’re doing it from home and doing it that way makes it all so much simpler.
Who’s Houdini and Mr Sundancer
I bought Mr Sundancer back in January and Who’s Houdini in May, and they’ve both settled in really well at home. Mr Sundancer had a nice long break when we first got him home but he’s back now jumping hurdles and I’m very happy with him. He could have been schooled even before I got him because he’s a very good jumper. He’ll run in the next few weeks. Who’s Houdini hasn’t been home as long but he’s a lovely big horse, about 16.3 hands. I saw him the day he fell in his point-to-point, and I thought he was going to go and win well, which is the reason I bought him. I’ll be targeting his first race carefully to make sure that the Point2Rules Bonus goes in our favour.