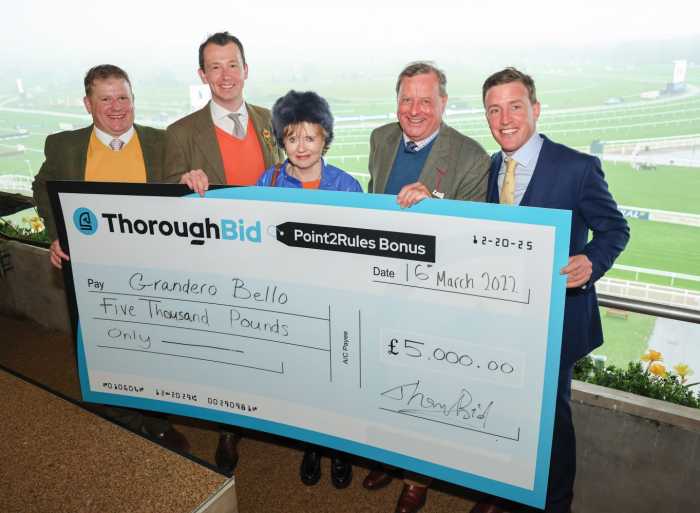 Grandero Bello, who landed his maiden point-to-point win in December at Boulta by six-lengths before being sold through the online auction house, won on rules debut at Punchestown in what looked a competitive 20-runner maiden hurdle to trigger the payout, and his new owners were delighted to be the first winners of the incentive.

The six-year-old’s new connections are no strangers to racing, with one being the sister of Champion Trainer Nicky Henderson, but when Josie Reed picked up the phone to Patrick and Ed Harty last year it was born out of a lockdown hobby when researching her family’s Irish heritage and duly got Barry Geraghty on the case.

She went on to purchase Grandero Bello for £50,000 in ThoroughBid’s Christmas Sale and has now already seen a 10% return on that investment from the Point2Rules bonus.

Co-owner, Josie Reed, said: “I’ve had horses in training with my brother [Nicky Henderson] before, and during lockdown I was looking into our family history where I discovered that we had some Irish heritage in County Galway. I thought the best way to honour this ancestry was with a horse, so I got in touch with Eddy and Patrick [Harty] who I know originally from Patrick’s days working for Nicky and then later as he introduced me to Might Bite in whom I had a share.

“I asked them to get in touch with Barry Geraghty, again who I know from his time at Seven Barrows and ask him to find me another Might Bite! It took him about a month before he called and said he’d found something that could be what I was looking for, and that he’s in a sale on Sunday night.

“I emailed a few people to see if they wanted to come in with me and Robert [Caddick] came back to me, so I gave the Harty’s the nod to get bidding, and I know they were very excited about the bonus incentive on offer.

“To be honest I had no expectations of him winning first time out at Punchestown, but that was a dream come true! The plan is to go chasing next year and he’s probably a three-miler, he’s a beautiful mover and I think that’s what Barry liked about him most.”

Barry Geraghty said: "It was an easy recommendation for me to make to be honest. Grandero Bello is a nice individual with a good frame and plenty of size. It was great to see him win first time up and win ThoroughBid's £5,000 bonus, hopefully we can see him progress into a nice chaser in time - he's certainly got the build for it."

James Richardson, CEO of ThoroughBid, said: “It was great to present Grandero Bello’s connections with ThoroughBid’s £5,000 Point2Rules Bonus at Cheltenham and hear about how ThoroughBid was recommended by Barry Geraghty.

“It just goes to show that these bonus incentives really can attract connections to a horse and that the Harty’s were looking at lots that qualified. We wish connections all the luck in the future with what looks to be a really bright prospect.

“The feedback from all involved has been extremely positive and we look forward to them returning in search of another Point2Rules winner.”

ThoroughBid’s next sale is the Spring Sale and Entries will close on Friday 25th March before bidding gets underway at 6pm Sunday 3rd April.