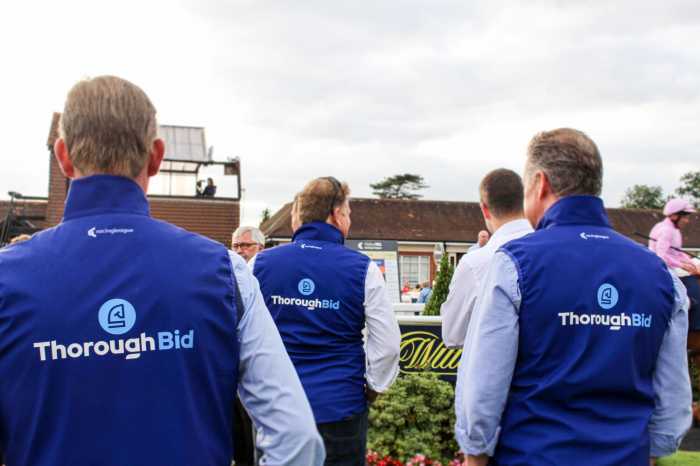 In their first two months, ThoroughBid have hosted two auctions and facilitated sales for leading trainers, including Charlie Hills, David Pipe, Jamie Osborne, Andrew Balding, Richard Hannon and Gary Moore, as well as for Dunraven Stud who consigned the highest-selling lot so far, Jolie Comtesse. The half-sister to champion stayer Trueshan sold for £60,000 at ThoroughBid’s inaugural sale in September, which also saw horses being sold as far afield as Kuwait.

Will Kinsey, co-founder of ThoroughBid, said: “The confidence at ThoroughBid is growing thanks to two successful auctions and plenty of positive feedback from key players in the industry.

“It’s a very busy time of year for the sales, but we’re beginning to get our share of the stock and are hopeful of some exciting catalogues for both our November Sale on Sunday 28th and the Christmas Sale on Sunday December 19th.”

The decision to confirm two dates comes off the back of another encouraging sale on Sunday 24th October, where the online platform drew praise from the likes of David Pipe and Charlie Hills.

Hills, who sold Shuraffa, a Shadwell-bred Shamardal mare in-foal to Muhaarar, for £11,500 at the October Sale, said: “It came as a surprise just how enjoyable the sale was. The process itself was very fun and watching the bids come through live throughout the day was a thrilling experience.

“We had hoped to get a good price for Shuraffa who is in foal after being covered by Muhaarar, the sire of this year’s British Champions Fillies and Mares Stakes winner Eshaada, and we were not disappointed. I can’t wait to get involved in the next sale and am hoping to line up some lots.”

Advantages of the bespoke platform include a secure entry and listing process, greater flexibility to host sales to suit market demand, and most significantly vendors’ proceeds will be made available from just seven working days after hammer fall.

Entries will close on Friday 19th November and Friday 10th December ahead of their respective auction.