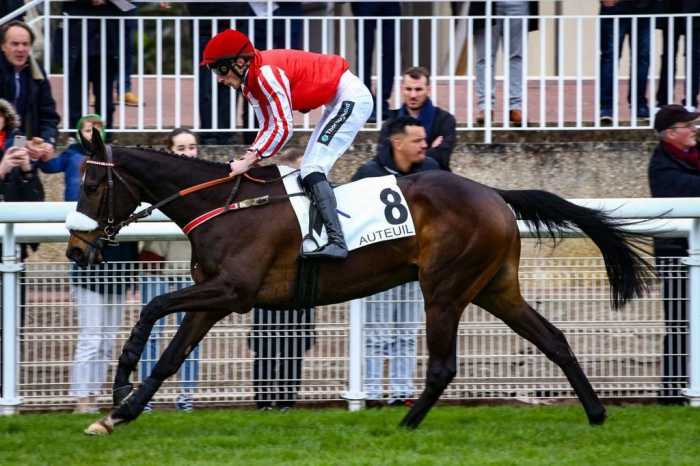 The Grand Steeple Chase de Paris is a funny race to ride in really because of the marathon distance. The French riders aren’t used to travelling over such a long distance [6,000m] and it’s only ever done twice a year over here, so sometimes they’ll go very steady early on and gradually quicken and then other times they can go very fast and get well spread out. It all depends on what’s running in the race. This year there is one that could tear away and make it a good gallop and that’s General En Chef. The last few runs though they’ve ridden him in behind, so it’ll be interesting to see what the tactics are with him on the day. Personally, I love riding in the race, and it is one of those where usually the best horse wins.

I’ll be riding Gex in the race, and I think he has a very good chance. He’ll arrive as a bit of a dark horse as he is unproven against this class of opposition, but he has had a good preparation and he has a sound mentality. He doesn’t get stressed out about things and takes it all in his stride which is just what you need in a race like this. Once he’s out there he just goes with the flow and he’s a good jumper that can handle most grounds, so fingers crossed he’ll put up a bold showing.

It'll be interesting to see how the Willie Mullins runners get on, which includes two-time Cheltenham Gold Cup winner Al Boum Photo. It’s been quite difficult in recent times for English and Irish runners to be competitive in the Grand Steeple, but these are obviously top-class horses who clearly stay well. If they jump well on the day, they could have good chances and might buck the trend.

I’ve won the race three times and I can’t say I have a favourite amongst them. The last time I won was by a short-head and that was an intense finish, but the time before the pressure was even bigger. It was the hot favourite and with those rides you can sometimes really feel the scrutiny you’ll be under, but thankfully it won well. The first time I won the race was totally unexpected and a total surprise, but sometimes you need those to go your way to kick start the other wins. Everybody wants to win the Grand Steeple over here, it’s like winning with Gold Cup or Grand National, but I think I’d probably rather win another Jockeys’ Championship. Although, having said that, I wouldn’t mind doing both!

On the subject of the Championship, my title tilt is going quite well this year, I’ve got a nice advantage, and I’ll try and keep up the work on that and claim my third title.