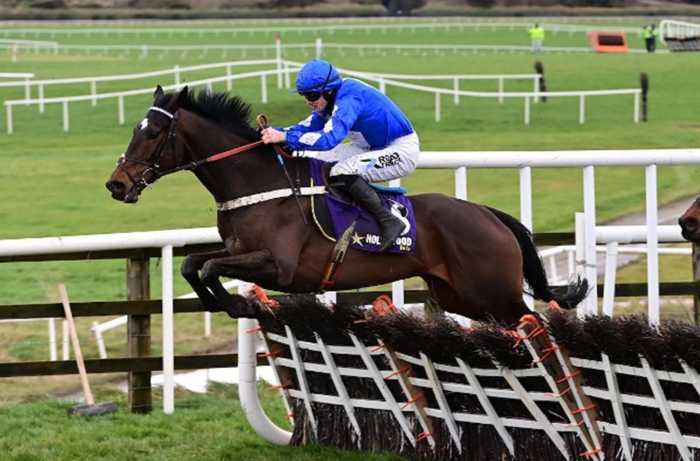 Grandero Bello, a 5yo son of Great Pretender from Monbeg Stables, was bought by Eddie & Patrick Harty for £50,000 at ThoroughBid’s Christmas Sale

Grandero Bello landed his maiden point-to-point win in December at Boulta by six-lengths and has now followed up on his rules debut at Punchestown in what looked a competitive 20-runner maiden hurdle on the weekend.

Co-trainer, Patrick Harty, said: “We were delighted to pick up Grandero Bello at the Christmas Sale and when it came to picking his first race, we were acutely conscious of ThoroughBid’s Point2Rules bonus.

“We actually bought him on Barry Geraghty’s recommendation for Josie Reed who is the sister of Barry’s former boss Nicky Henderson. Josie and her friend Robert Caddick were on the lookout for a nice young horse in Ireland and this lad fit the bill perfectly.

“He’s a big horse with a lot of scope but he doesn’t always turn up at home on the gallops, so we were just hopeful of a good run. We’ll try and turn him out a couple of times before the ground starts to dry up but whatever he does this year he’ll improve for it. He clearly stays well and is fluent in his jumping from his point-to-point days, so in time he’ll make a nice staying chaser. Who knows what the future could hold for him, but we’re hopeful he could be a National type of horse.

“Trainers are creatures of habit, and we hope they’ll be some more nice types at the March sale, because the regular sales experience can be a bit of an all-day slog so to be able to bid from the comfort of your own office with a cup of coffee or glass of wine is no bad thing.”

James Richardson, CEO of ThoroughBid, said: “We announced the new Point2Rules bonus at the back end of November and it’s great see its already having an impact.  We’re delighted that we haven’t had to wait long to see the first horse go on to claim the prize, and would like to congratulate Eddie, Patrick and connections on a horse who looks to have a very bright future.”

“We were very excited when Monbeg Stables wanted to use ThoroughBid to showcase this exciting prospect and we don’t think it could have worked out better for them, as he sold nicely for £50,000. Eddie and Patrick Harty are chuffed too, as they clearly have a nice type on their hands, along with £5,000 to be shared amongst connections.”

ThoroughBid’s next auction is the March Sale on Sunday 6th March.