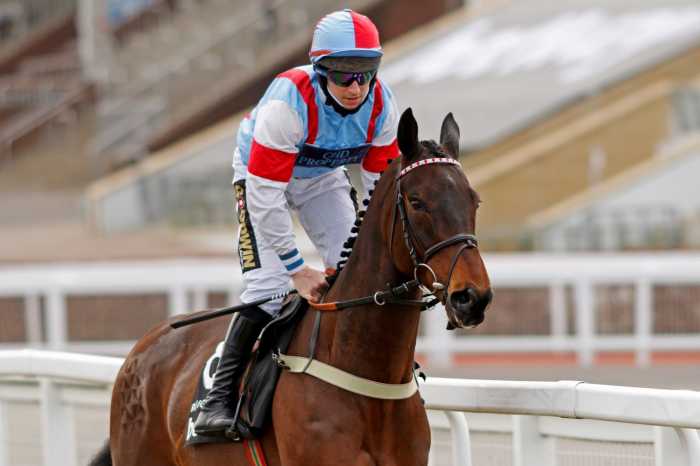 He’s a horse I’ve always loved with serious form in the book. He bolted up in his bumper and bolted up in a hurdle, he then won a nice Listed race around Kempton. He’s a very classy animal but his form around Haydock against Bravemansgame could be very good, he completely served it up to him. Itchy Feet has a lot of ability and he gave Bravemansgame a lot to think about and he could be anything, but he still put it up to him. Itchy Feet is one of those characters, he’s a bit of a dude and he’s got a lot of ability, he’s one of those horses that stands out.

The Grade One win at Sandown in the Scilly Isles Novices’ Chase was obviously a highlight, and I didn’t have to ask any questions really until the last and when I did ask, then he took off. He’s got a bit about him, and Itchy feet is probably a good name because when he’s inside his box and you go to tack him up, he doesn’t stand still.

He’s a nice athletic horse. Physically he’s one you look at and think he’s going to be a nice type. In terms of ground, he’s very versatile. We always thought better ground would help him, but his best form is arguably on a softer surface.

I think Haydock just gave him a bit of time. The fences around Haydock require a lot of jumping but that’s probably the best he’s jumped. It’s one of those tracks you just have to have to get into a good rhythm and he got into a good rhythm that day.

He’s definitely worth his money. He’ll pick up a big race one day.

Rouge Vif is a horse I love who tries for every yard in a race. The G2 Kingmaker Novices’ Chase was a great buzz and brilliant fun. It was good ground that day and I popped out with him, every step we took felt nice, it was a great thrill. He jumped very quickly put his head down at the back of the last and gave it his all. It was a serious performance. It’s all about speed at Warwick and he put his head down and quickened into each of the five fences that come at you quick there. Normally you don’t meet all of those obstacles on a good stride but he just attacked them all. We were gaining lengths in our jumping that day. He’s a very classy animal and I think now he probably wants a step up in trip.

He’s also got form behind, as well as in front, of Nube Negra, this time in the Desert Orchard and he is obviously very talented. He won with a very good turn of foot that day whereas Rouge Vif is more of a horse that you’ll have to fight to get past him if he jumps out and gets a good gallop.

Rouge Vif is a very athletic horse. You look at him and you’re thinking he’s a speed horse, not in the sense that he’s narrow, but he’s actually quite a strong, sturdy type. He’s a forward going horse as well.

Over two miles you’ll have to bounce out and get into a strong gallop. At that Grade One level, there was always one horse that was a little bit quicker, so I thought stepping up in trip was probably the best way going forward. I think he’s got more stamina to give.

He has more to give that’s for sure, I think he can step up in trip and even go to three miles, I wouldn’t be afraid of it.

He went to Kelso and won a Grade Two there. That was our first time stepping up to 2m2f and we weren’t sure about the trip, but I was quite keen on him stepping up. That day we went a nice gallop and I noticed when I jumped the last one down the back that he could quicken, so I gave him a kick in the belly and he just took off.